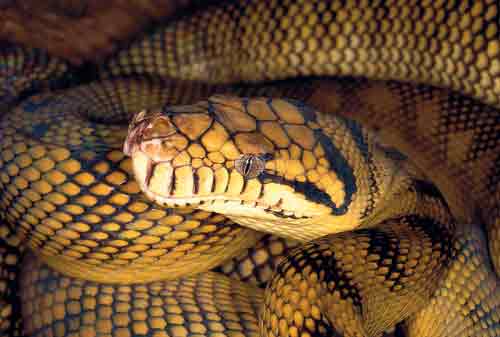 Generally considered the world’s largest snake found in Southeast Asia. It can grow up to 6.95 m (22.8 ft) in length. It is hunted for its skin, for use in traditional medicines. It is a non-venomous constrictor. Its natural diet includes mammals and sometimes birds. This is the biggest snake in the world that is real.

Generally considered the second longest snake, also known as giant anaconda, common anaconda, sucuri. It is the world’s heaviest and one of the longest snakes. It is a non-venomous constrictor. The term “anaconda” often refers actually to this species. They can reach 6.7 m (22.0 ft) in total length. This is the largest anaconda ever.

This is Africa’s largest snake and counting in one of the six largest snake species in the world. They may reach or exceed 6 m (20 ft) in length. African rock python is non-venomous and kills by constriction. They are found in sub-Saharan Africa.

They are found in a large area of Southeast Asia and one of the largest species of snakes in the world. They typically grow to 5.74 m (18 ft 10 in). They live in grasslands, marshes, rocky foothills, woodlands, swamps, river valleys, and jungles with open clearings. They mostly stay on land. They one of the biggest python in the world.

They are the species of non-venomous snakes and counted as one of the six largest snakes in the world. Amethystine Python is also known as the scrub python or sanca permata. The species is found in Indonesia, Papua New Guinea, and Australia. This python generally eats birds, bats, rats, possums, and other small mammals and can grow to 5 m (16.4 ft).

Yellow anaconda, also known as the Paraguayan anaconda. It is non-venomous and grows up to 4.6 m (15.1 ft) in total length. They found in western Brazil to northeastern Argentina and northern Uruguay.

Boa constrictor is a heavy-bodied snake, found in tropical South America, as well as some islands in the Caribbean. It is also called the red-tailed boa or the common boa. It is non-venomous and can reach lengths from 3–13 ft (0.91–3.96 m).

This is the nonvenomous python species found in the Indian subcontinent tropical and subtropical regions and in Southeast Asia. They are also known by the common names Python molurus, black-tailed python, Indian rock python, and Asian rock python. They can reaches usually 3 m (9.8 ft) in length.

They are also known as Chilabothrus angulifer, found in Cuba and on some nearby islands. They stay in tropical dry forests and scrub forests. They can grow up to 6 metres in length.

Also known as Apodora papuana, this is the species of python. They are found in New Guinea. They can grow up to lengths of over 5 m (17 feet). No subspecies are currently recognized for this python.