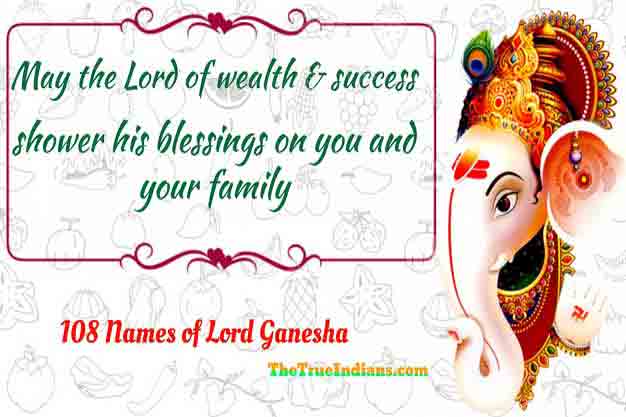 Ganesha also known as Ganapati, Yashaswi, and known by various other names also, and he is considered as one of the best-known and most admired creators in the Hindu pantheon. His appearance is found all over India, Sri Lanka, Nepal, Thailand, Fiji, Mauritius, Bali (Indonesia) and Bangladesh. Ganesha’s elephant head makes him clear to classify. Ganesha is a famous figure in Indian art. You can address your baby by various Lord Ganesha names with meanings.

Lord Ganesha has an exceptional place among the Hindu Gods. Ganesha is widely admired as the remover of all obstruction. He is the first God to be worshiped before starting any puja. He is called the bestower of wisdom, that’s why children are encouraged to recite his mantras and praise Him.

Ganesha has been reference many other titles and designations, including Ganapati (Ganpati), Vignesh, and Vikat. The Hindu title of honor Shri is often added before his name. The name Ganesha is a Sanskrit combination, joining the words gana, meaning a group, or categorical system, and isha meaning lord or master. Ganapati is the other name of Ganesha, composed of gana, meaning “group”, and pati, meaning “lord”. There are many different names of Lord Ganesha. People entitled their children based on Ganpati Names as they believe that the qualities of Ganapati do reflect their children.

Vinayaka (विनायक; vināyaka) is a frequent name of Ganesha that come out in the Puranas and in Buddhist Tantras. This name is reflected in the naming of the 8 renowned Ganesha temples in Maharashtra. An eye-catching name of Ganesha in the Tamil language is Pillai or Pillaiyar. These names are differentiated by A.K. Narain. The term “Pillai” signify a “kid” while pillaiyar signifies an “honorable youngster”.

Let us tell you all there, Ganesha is known as ‘Maha Peinne’ in the Burmese language. The name is derived from Pali Maha Winayaka. And the common name of Ganesha in Thailand is ‘Phra Phikanet’. In this article, you can find the best Lord Ganesha names for baby boy. We have described 108 names of Ganesha and more with meaning and gender specifications. You can go through this list and name your child based on this.