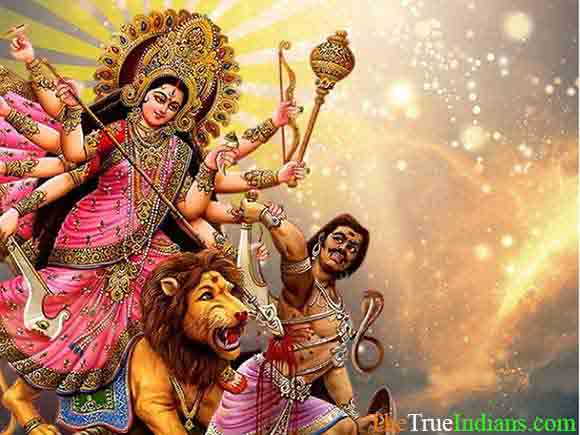 Goddess Durga, identified as Adi Parashakti, is a principal and prominent form of the Hindu Goddess. She is a destroyer of evil, goddess of war, known as the warrior form of Parvati. There are many epitome of Durga: Kali, Gauri, Bhagvati, Ambika, Lalita, Bhavani, Rajeswari, Kandalini, Java, etc. Durga Maa is portrayed in the Hindu shrine as a Goddess riding a lion/tiger, with many arms carrying a weapon, often defeating Mahishasura. Goddess Durga also known by various other names like Maheswari which means ” Great lady” or “An epithet of Durga”, and Nandana means “Great achiever” “Happiness” “Heartening” “Indra’s paradise”. You can title your baby by various Durga Names.

The word Durga actually means “impassable”, “invincible”, and “unassailable”. It is associated with the word “Durg” which means “fortress”. Maha Durga, Chandika and Aparajita are the three main forms of Durga that are worshiped. She is a significant deity in Shaktism tradition of Hinduism. People of our country choose Goddess Durga names for their baby girls as they are inspired by their qualities. Durga Puja also combines the worship of Shiva, who is Durga’s associate.

Let you know, Dashain is the longest national holiday of Nepal, and this festival is dedicated to Goddess Durga. We have listed various Goddess Durga names with meaning and gender specifications. You can go through this list and name your child based on these Devi Names.

Goddess Durga is also know as Shakti, means protective mother of the Universe. You will find different Maa Durga names here and can easily opt one of them for you baby. Also, we have listed other names of Goddess Durga for babies.

Did you find the best name for your baby, If yes, keep reading our blogs and share with your dear and near ones.
Thank You !!!!!

May Durga maa empower you and your family with her nine Swaroop of Name, Fame, Health, Wealth, Happiness, Humanity, Education, Bhakti & Shakti