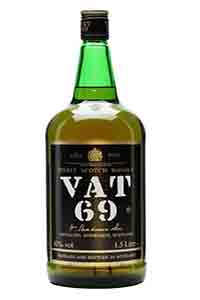 Blended Scotch whisky is a blend of malt and grain whiskies. These products are the soul of the industry. It is commonly a product of infusing one or more single malt whiskey with other ingredients. We have listed some best-blended scotch whisky around the world.

Ballantine is blended with 50 single malts and 4 single grains. Its flavor is dependent on fingerprint malts. It has been historically strong in Southern Europe where it was among the first Scotch whiskies to gain a foot in the market. This blended whisky is the world’s second-highest selling Scotch whisky.

This blended whisky is produced by Pernod Ricard. It is the seventh-largest blended Scotch worldwide, no. 2 blended whisky in Asia, and the no. 1 standard whisky in Thailand. 100 Pipers is blended between 25 and 30 source whiskies. This whisky brand received a Gold Medal at “The Asian Spirits Masters 2014”.

Chivas Regal was founded in 1786, manufactured by Chivas Brothers. It is one of the best-blended Scotch whisky in the market. Its sales grew by 61% between 2002 and 2008 but decreased to 4.4 million cases in 2015. It has been the world’s fourth best-seller since 2016.

Old Smuggler is a famous whiskey brand produced by Gruppo Campari. Its name is based on the history of ancient Scottish smugglers. The Old Smuggler belonged in 1946 to the firm Hiram Walker and later passed to Gruppo Campari who captured the brand in 2006.  Old Smuggler has a broad market in the world.

It was originally produced by James Buchanan & Co Ltd. After a series of dissolution and acquisitions, the brand is now owned by Diageo and sold only outside the United Kingdom. The brand claims to be the most successful in France, Brazil, and Venezuela.

Vat 69 is a blended Scotch whisky produced by William Sanderson & Son Limited. It is not a vatted malt. This whisky is a blend of about 40 malt and grain whiskies.

White Horse won blended whisky of the year in 2006. White Horse gained the limelight for its use of the Lagavulin.

This blended whisky is named after its founders Beaumont Hankey and Hugh Bannister. This Whisky is blended from Lowland grains and Highland and Speyside malt whiskies. It won the silver medal in International Wine and Spirit Competition in 2018.

It is a brand of blended Scotch whisky, first produced by Matthew Gloag & Son in 1896. Its emblem is the red grouse inspired by Scotland’s national game bird. The brand is currently owned by The Edrington Group.

It is the most popular brand of blended Scotch whisky in the world with an annual sales equivalent of over 223.7 million 700 ml bottles(around 156.6 million liters) in 2016.