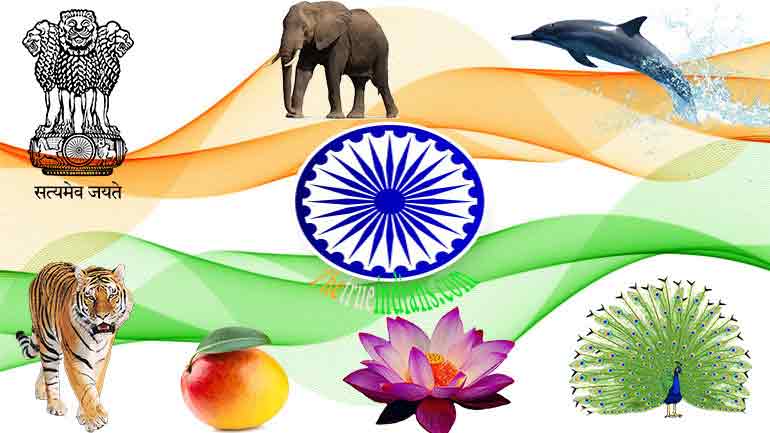 The Republic of India has many official ‘National Symbols’ along with an anthem, a flag, an emblem, a memorial tower, a historical document as well as many national heroes. All the symbols were taken up at different times. There are also many other symbols like the national animal, bird, fruit, and tree. National Symbols represent the National Identity Elements of India. These symbols are peculiar to our identity and heritage. These symbols depict the culture, values, and nature of India. You must know the ‘importance of national symbols of India’ and when and how they come into existence.

Our National Symbols show a true representation of our bountiful culture. Indians across the world are proud of these National Symbols as they inculcate a sense of pride and nationalism in every Indian’s heart. We are a perfect mixture of diverse languages, religions, & lifestyles. Here is the ‘list of National Symbols of India‘ you should definitely know.

Also called ‘Tiranga ‘, a horizontal tricolor with saffron (Kesaria) at the top, white in the center, and green at the base in equal proportion. Coming to the colour significance, Saffron signifies sacrifice and patriotism, white signifies peace and truth, and green signifies life and prosperity. In the middle of the white stripe is a navy-blue wheel which represents the Ashoka Chakra.

The Chakra has 24 spokes with diameter approximates to the width of the white strip. Its design is like the wheel which comes out on the abacus of the Sarnath Lion Capital of Ashoka. There are many more key facts of our ‘National Flag of India‘.

The National Anthem ‘Jana-gana-mana’, composed originally in Bengali by Rabindranath Tagore. It was adopted in the Hindi version on 24 January 1950 by the Constituent Assembly as the National Anthem of India. On 27 December 1911, it was first sung at the Kolkata Session of the ‘Indian National Congress’. The playing time of the National Anthem is approx 52 seconds.

Vande Matram means ‘Respectfully saluting Mother‘. It is composed in Sanskrit by Bankimchandra Chatterji and honoured an equal status with ‘Jana-gana-mana’. The song was adopted as the ‘National song of India‘ in 1950. Vande Matram became the patriotic expression during the Indian Independence movement. The song was sung by Rabindranath Tagore during the 1896 session of the Indian National Congress.

Indian rupee (ISO code: INR) is the official currency of the Republic of India and controlled by the Reserve Bank of India (RBI). The symbol is derived from the Devanagari consonant “र” (ra) and the Latin letter “R” was adopted in 2010 and circulated on 8 July 2011. Udaya Kumar Dharmalingam designed the new sign of Indian Rupee based in Kallakurichi, Tamil Nadu. As indicated by Udaya Kumar the plan depends on the Indian tricolor.

The ‘National Emblem‘ is adapted from the Sarnath Lion Capital of Ashoka. There are four lions, standing consecutively, mounted on an abacus with a frieze bringing sculptures in high alleviation of an elephant, a galloping horse, a bull, and a lion separated by intervening wheels over a bell-shaped lotus with beautiful wheel Dharma chakra at the center.

It is an oath of allegiance to the Republic of India. National Pledge is recited by Indians in unanimity at public events and during the Independence Day and Republic Day celebrations. It was composed by an author and a bureaucrat, Pydimarri Venkata Subba Rao.

Shalivahana Shaka calendar is the Indian national calendar and also used in Java and Bali among Indonesian Hindus. The months in this calendar follow the signs of the tropical zodiac.

Ganges or Ganga is considered as the National River of India. It is the longest river of India flowing over 2,510 kms of mountains, valleys, and plains. The Ganga is admired by Hindus as the most sacred river on earth. It originates in the Himalaya & merges with the Indian Ocean.

Lotus is the ‘National Flower of India‘. It is a religious flower and has an important place in the mythology of ancient India. It is a symbol of spirituality and purity that’s why it is called the sacred symbol of Hinduism.

Mango is the ‘National Fruit of India‘ and considered as the king of fruits. It is the most favorite fruit among Indians. It is widely cultivated fruits of the tropical world. It is a rich source of Vitamins A, C, and D. There are around 100 varieties of mangoes are available in India in different shapes, sizes, and colours.

Banyan tree represents the ‘national tree of India‘. Due to its characteristics to form new trees and grow over large areas, this tree is considered immortal and it is an integral part of the myths and fictions of India. It’s called ‘Banyan tree’ because it has immense medicinal properties and is associated with longevity.

The combination of strength, cleverness, and enormous power has earned the tiger to take its place as the ‘National Animal of India‘. They found in the Indian subcontinent and can be found in most regions of the country.

The Indian peacock, Pavo cristatus, with a beautiful fan-shaped crest of feathers is the ‘National Bird of India‘. They are colourful, swan-sized bird with a slender neck. The peacock represents the unity of animated colours. Indian Government declared the Peacock as the National bird of India on February 1, 1963.

King Cobra: The National Reptile of India. They found in the forests of India and Southeast Asia. They are highly poisonous and one of the deadliest snakes in the world. Their single bite contains around 6ml of poison which is enough to kill 20 people and even huge animals like an elephant. It is one of the world’s longest snake with a maximum length of 18.8 ft.

The Indian elephant is declared as the national heritage animal of India since October 22, 2010. To increase protective measures, India’s Environment Ministry declared the elephant a National Heritage Animal of India. The elephant is the most popular of Hindu deities known as Lord Ganesh and worshipped before starting any new task.