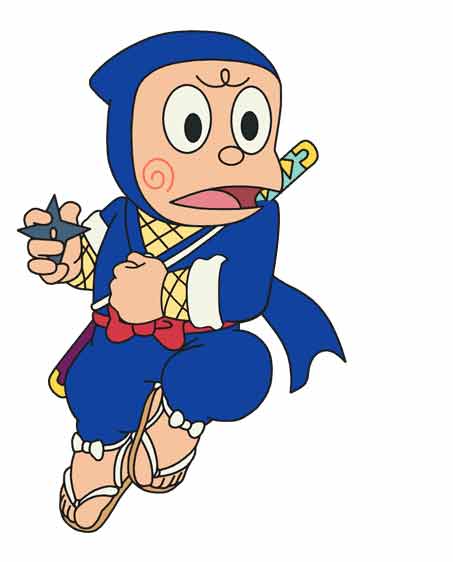 Ninja Hattori, a Japanese animated series aired between the mid-60s has one of the most loved cartoon characters. Kanzo Hattori, the lead ninja in the anime has a great set of ninja tactics to tackle problems faced by him and his friends.

Ninja Hattori all characters name in the anime

Kanzo Hattori is the little ninja who wears blue ninja-yoroi. His tactics are that of a master ninja yet who is afraid of frogs and lizards and mostly gets into problems because of them. He stays with Kenichi Mitsuba and is a part of his family along with Shinzo Hattori and shishimaru.

Kenichi Mitsuba, an 11 years old boy who is weak in his studies. He has a soft corner in his heart for Yameko kawai, a cute girl who studies in his class. Kenichi always gets in trouble due to Kemumaki who is also after Yameko. Kenichi being one of the top characters of ninja hattori always seeks Kanzo to help him in all difficult situations.

Shinzo Hattori, Kanzo’s younger brother is a ninja-trainee who wants to be a master ninja, like Kanzo. Shinzo is loyal to his brother and gets exhilarated when others get exhilarated. He wears a red ninja-yoroi and has a high pitch crying voice which makes his opponents faint. He uses weapons made from wood and also helps his brother Kanzo fight Kemumaki. Though, Kanzo always tries to take care of his brother still he makes Shinzo go through tough tasks to train him to become a master ninja.

Shishimaru, the yellow ninja dog is a casual and unpretentious dog who lives with Kenichi. He has a powerful weapon of transforming into a fiery ball when attacked. He is indolent and obstinate and mostly does what he likes to do. He is one of the most loved ninja hattori character as he can also transform into any animal.

Kemuzou Kemumaki, studies in same school as Kenichi and Yumeko. He is a strong ninja and wears green ninja-yoroi. He always tries to compete with Kenichi to get close to Yumeko. Though, whenever Kemumaki uses his ninja tactics Kanzo rescues Kenichi. He along with his cat Kagechiyo causes troubles for Kenichi. This is one of the top cartoon characters in the series.

Kagechiyo, is a ninja-cat who hides in Kenichi’s place and communicates Kenichi’s plans to Kemumaki. Kemumaki trusts him and gives a major part of his plan to Kagechiyo for handling. Kagechiyo becomes electrifying when he rubs his back with a steel plate.

Kentaro Mitsuba, the father of Kenichi and not so famous character of ninja hattori as he comes late in the evening and presents in only a few episodes. He loves eating and is fond of watching golf. Though he loves Kanzo and Shinzo as their own kids but at times quarrels with each other for watching their favorite television program.

Tsubame, studies in same class as Hattori Kun. She likes hattori and always wants to marry him. She doesn’t like Kemumaki and Kagechiyo. She is good at music and owns five wind instruments made up of wood.

Ama Mitsuba, the mother of Kenichi loves Kanzo and Shinzo as their kids. She also likes Kemumaki as she is not aware of Kemumaki being a ninja. She is mostly busy in household works and scolding Kenichi for his poor grades in school.